The Federal Communications Commission will vote to put an end to its net neutrality rules next month, commission chairman Ajit Pai said today. The proposal will reverse the Title II classification of internet providers, which allows the agency to put strict limits on their behavior, and replace it with the old “information service” classification, which a federal court has ruled is less comprehensive, weakening any protections that might replace those currently in force.

That is if the agency even wanted to replace them: it sounds like this proposal will leave the internet without any sort of net neutrality protections. The full text of the order — a final revision of the proposal that received 22 million comments over the summer — will be released tomorrow. For now, we only have a summary from Pai.

“Under my proposal, the federal government will stop micromanaging the internet,” Pai said in a statement emailed to reporters. “Instead, the FCC would simply require internet service providers to be transparent about their practices so that consumers can buy the service plan that’s best for them and entrepreneurs and other small businesses can have the technical information they need to innovate.”

THE FCC IS HANDING OFF OVERSIGHT TO THE FTC

The FCC’s goal is to set up the Federal Trade Commission to handle all anti-competitive disputes, and the idea is that if ISPs violate their stated policies, the FTC will be able to take action.

This is a puzzling plan and one that the FCC has to be well aware will not offer any legitimate consumer protections. Companies’ terms of service and related policies aren’t meant to protect consumers, they’re meant to protect companies — and they can change at a moment’s notice. While it’s entirely possible that a company could violate its own policies and get in trouble with the FTC, a company could also just promise open internet protections until it doesn’t feel like following them anymore, rewrite its policies, and then implement new and potentially discriminatory practices. 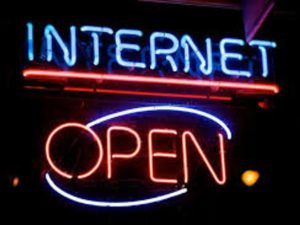 And while this all might work out if American consumers had several internet providers to choose from at home, so that they could switch away from a bad provider and over to one that values an open internet, that’s far from the case. Less than a quarter of the country has two or more home internet providers that offer basic broadband speeds — so if you don’t like what your provider is doing, you’re stuck.

Republicans have argued that the FTC is the expert agency on anti-competitive practices and ought to be in charge here, but that obfuscates what’s really happening. The FTC is a single agency tasked with protecting consumers across a wide range of industries — it simply doesn’t have the focus of the FCC to narrow in on just internet providers. Nor does the FTC have the ability to proactively set tough rules. The FTC can only establish guidelines, which gives internet providers a lot more leeway to experiment with practices that work to their own advantage.

In reality, the FCC is trying and will likely succeed in giving internet providers the leeway to try whatever policies they want over their own networks. Pai’s argument has been that by giving internet providers this flexibility, they’ll be able to make money in new ways, which they could then pour back into building out their network. The theory is that they could then bring service to areas that wouldn’t be profitable enough to reach today. Since the agency wants to get more and more Americans connected, that could be considered a win — though the service may look different than what we receive today in some very important ways.

Net neutrality supporters are already fearing the worst based on what Pai has announced. Democratic FCC commissioner Mignon Clyburn said the rules (or lack thereof) “would dismantle net neutrality as we know it by giving the green light to our nation’s largest broadband providers to engage in anti-consumer practices, including blocking, slowing down traffic, and paid prioritization of online applications and services.” And fellow Democratic commissioner Jessica Rosenworcel described the same fears, saying this proposal “hands broadband providers the power to decide what voices to amplify, which sites we can visit, what connections we can make, and what communities we create. It throttles access, stalls opportunity, and censors content.”

The Internet Association, a trade group that represents web 40-some web companies including Google and Facebook, pointed to lack of ISP options as a critical flaw in the plan. “Consumers have little choice in their ISP,” the organization said, “and service providers should not be allowed to use this gatekeeper position at the point of connection to discriminate against websites and apps.” And ACLU policy analyst Jay Stanley issued a similar warning, saying, “Gutting net neutrality will have a devastating effect on free speech online. Without it, gateway corporations like Comcast, Verizon, and AT&T will have too much power to mess with the free flow of information.”

GUTTING NET NEUTRALITY WILL HAVE A DEVASTATING EFFECT ON FREE SPEECH ONLINE.

The rules go up for a vote next month, on December 14th, when they’re almost certain to pass. The FCC is majority Republican right now, and Republicans have been calling for the end of net neutrality ever since the policy was first put in place. There’s also no reason for Pai to put the measure up for a vote unless he knows it’s going to pass.

After the vote, it’ll take a month or so before the new policies appear in the Federal Register and go into place, overwriting the only net neutrality rules. That doesn’t mean everything will be all over, though: there’s certain to be a court battle — or two, or three — to follow. Net neutrality advocates will take the commission to court, likely claiming that it failed to find enough evidence to warrant overturning a decision made just two years earlier. Advocates may also say the commission ignored process, having made up its mind from the start and ignoring millions of comments from the American public in support of net neutrality.

Supporters of net neutrality have long argued that the rules are necessary to protect consumers’ from price gouging and protect small companies from anti-competitive behavior. Paid fast lanes could allow wealthy companies to pay for better service, giving them an edge over upstarts (say, YouTube vs. a brand new streaming service). A lack of discrimination rules could let internet providers like Comcast and AT&T advantage their own content — like NBC and HBO — over others’, by making it stream faster or not count toward data caps. And an absence of no blocking rules means that internet providers could stop apps that compete with their own from reaching consumers.

This content was originally published on The Verge. Find out how you can fight for net neutrality here; https://www.battleforthenet.com/

Full disclosure: Fastmetrics supports net neutrality, for many reasons. We believe that internet access is a utility for everyone. Other reasons that make net neutrality important are well explained here.

The current classification of internet access as a Title II telecommunications service, should not be repealed. Net neutrality also allows us and other Bay Area ISPs to compete with large nationwide carriers and cable companies, which enables us to keep offering an alternative service to businesses throughout the Bay Area and L.A.