Authentication Now Comes With A Wave Of Your Hand 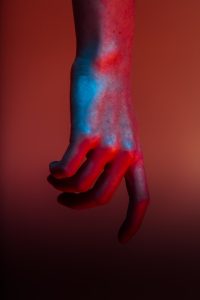 “You can think about the palm as a very large fingerprint,” says Kontsevich. “It has a rich structure and can be captured by any camera touch-lessly.”

After Kontsevich worked with the startup Kaching! the graduate of the Moscow Institute of Physics and Technology went to the lab to demonstrate (using only existing database technology) the matching software algorithms between palm prints and their unique signatures that would become the basis for Redrock Biometrics.

The issue, for Kontsevich, was capturing the images and processing them from a background. That’s where Hua Yang, Kontsevich’s Leap Motion colleague came in. The two absconded from Leap Motion in 2015 and founded Redrock biometrics on the basis of Kontsevich’s work and Hua Yang’s background in machine learning and visualization.

“There is no other commercially available palm biometric which works with RGB camera,” Kontsevich told me.

Redrock’s technology converts a palm image into a unique signature and authenticates the user in 10- to 100-milliseconds depending on CPU speed, according to a statement. The technology uses machine vision techniques to detect a palm in a video stream and pass its descriptor for enrollment or verification, according to a statement. The technology runs on either a client or a server and matches a verification request against an enrollment template, using proprietary algorithms tested on thousands of palms.

Positioning palm biometrics vs. either fingerprint or iris scanners, Konsevich says that the palm scanning technology he’s developed doesn’t require special equipment. And it’s far more secure than scans like the face scanning technology currently the rage thanks to Apple’s new iPhones. There are thousands of images of people’s faces publicly available on social media that can be used to fake a face scan, says Konsevich.

“A palm, in this regard, is much harder to get. People don’t make photographs of their palm in good resolution.”

Most of the company’s competitors are coming from university research products, which haven’t developed a fully integrated product, but one company that did manage to take something to market was Fujitsu, which has been pitching a service called Palm Secure.

“The beauty of our approach [is] it’s secure and works across all devices that have a camera,” says Konsevich.”That provides a breadth of applications that can start with online, banking, or an ATM.”

The company is also claiming that its biometric authentication and identification technology is “enrollment portable”, with authentication technologies available for sign-in authentication across Windows, Android, iOS, Mac OS, and Linux as well as stand-alone client-server technologies. Any device with an RGB or infrared camera and a central processing unit can use the technology, the company said. Beyond the feats of prestidigitation and portability that Redrocks biometric scanning technology allows, the company also differentiates itself by showing intent rather than presence, according to Konsevich.

“A face shows your presence. A palm shows your intention,” says Konsevich.

The company, whose software becomes publicly available today, was operating as part of the Wells Fargo Accelerator program. “We’re an early stage seed partner,” says Bipin Sahni, who serves as the Head of Innovation and R&D, Innovation Group – ‎Wells Fargo. Sahni says the biggest asset of the accelerator is the validation it gives to other potential bank clients. That said, the accelerator has notched some notable successes. It’s portfolio EyeVerify was brought into Ant Financial and Zowego is a company that’s seen exceptional growth, Sahni says.

“We’re not doing this to make 10x, 20x, or 40x,” says Sahni. “This is a ‘return-on-innovation’ point of view. Some of these companies will go on to be very big enterprise service providers. It helps them work in our environment and helps them mature as a company too.”

This article was originally published on TechCrunch.